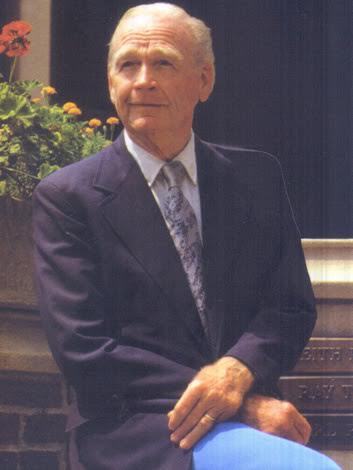 Dr. Joseph E. Walther, born and raised in Indiana, earned his M.D. from Indiana University. He served as a physician and a member of the medical staffs for various hospitals in Hawaii and the Indianapolis area. Dr. Walther served 6 years in the U.S. Air Force, receiving several medals for professional skill and courage, as well as, 24 years in the military reserves, retiring as a colonel.

In 1966, with the help of a small group of community leaders, he founded the not-for-profit Winona Memorial Hospital in Indianapolis, Indiana and named it in honor of his mother, Winona McCampbell Walther. Throughout his career, Walther was recognized for extraordinary service and accomplishment by numerous organizations.

Dr. Walther’s beloved wife, Mary Margaret, succumbed to colon cancer. Her suffering and passing was a transformational experience for him. Shortly thereafter, Walther devoted his life and work to funding cancer research in hopes of finding a cure. In 1985, Walther sold Winona Memorial Hospital and established the Walther Cancer Institute, a medical research organization. In 2007, the Institute merged into the Walther Cancer Foundation, an independent, private grant-making institution. Dr. Walther realized that insights into this family of diseases go beyond initiatives that seek to unlock the fundamental secrets of the transfigured cells that give rise to cancer. Thus, in addition to investing in basic research, Foundation support also includes research programs that test new therapies and focus on human behaviors as well as ways patients and their families respond to a diagnosis of cancer.